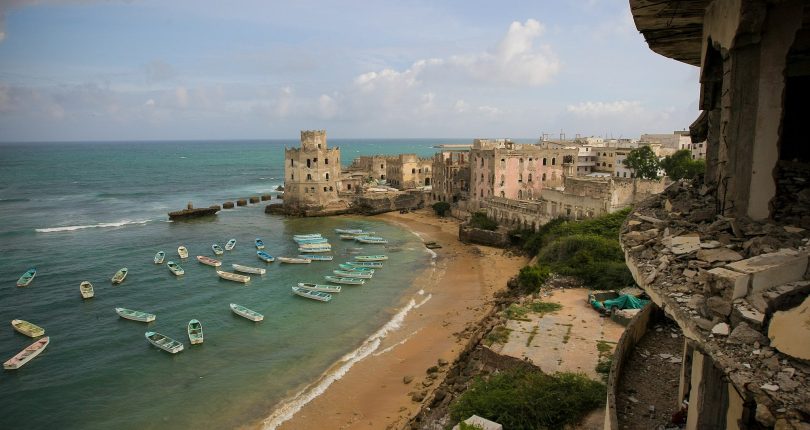 The country club in Mogadishu, a cross between a palace, a fortress and a wooden shack, is a refuge for high-ranking government officials, business people and the city’s wealthy.

Fifty guests seated at a long table with bowls of camel stew, goat meat, lobster and swordfish, were enjoying their lunch when the war stroke at the country club.

A van full of explosive detonated in front of the gate demolishing part of the protective wall, blowing the second floor off the villa and destroying the building’s entire front. Four attackers fired at the country club’s security. When the fire finally stopped twelve hours later, 16 guests and 3 gunmen had been killed.

When we got back to the club six weeks later, it was as if nothing had happened. The villa was resplendent again and a new 2.5 meters wall of sand and cement now protected the whole club. The country club is probably the weirdest place in Mogadishu, capital of Somalia a country that for 27 years had a government unable to exert it control across the country and that has been at war for three decades.

Here the power is in the hands of warlord, dubious businessmen, and al-Shabaab, the al-Qaida allies responsible for the deaths of 4,400 people in the past year. Mogadishu is a chaotic city ruled by fear.

At the club, we met Manar Moalin, the owner. Today she is wearing a blue headscarf, a cobalt-blue shirt and a black vest, tight jeans and a gold nose-ring. She tells that this is how things go here.

Moalin did not always live here. She grew up in Italy, moved to London to study economics and then moved to Dubai where she run a luxury spa. She tells that it was a good life but then her mother came back to Mogadishu and she also felt like going back to her roots.

She started coming back for visiting and then her visits became more frequent until she finally moved back for good and opened the country club in December 2014.

She explains that at first it was very hard, she did not have any allies, her competitors sent intelligence services to her club, and she was threaten, denounced and robbed. It took her 12 months to learn the rules and even though she does not have the freedom she used to have when she was leaving abroad, she does not intend to move away.

Her brother tried to get her back to Dubai and her children and husband would love back but she persists. She wants to help her country. For her it is about principle, it is not about money.